In my previous post, I explained how to install PostgreSQL in an EC2 Instance. In this post, I’m going to show you how you can automate that process using Terraform.

For those of you who are not familiar with Terraform, it is an automation tool for infrastructure. It allows you to define your infrastructure using code and manage it in an automated way. It has multiple implementations for different cloud providers to use Terraform to manage infrastructure in AWS, Azure, Google Cloud, Digital Ocean, etc. So it’s a versatile tool to have in your belt. I’m going to focus on AWS for this tutorial.

You might wonder why we need so many resources when we’re interested only in launching one EC2 instance for our PostgreSQL database server. From the previous list points, 1 to 4 are network related. When you create a new AWS account, a “default VPC” is made for us. We could be using that VPC, and this script would be more straightforward, but I thought it’d be a good idea to create a new one. Hence, you have more control over your network setup if you wanted to extend this script with application servers, as we will see in future tutorials. In the Terraform scripts, you can use or reference resources that Terraform has not created in your AWS account.

To use Terraform with AWS, you need to have an AWS account, as well as the AWS CLI installed. Once the CLI is installed, run this command to configure it:

You also need to have Terraform installed, if you’re using OS X, it can be quickly done using Homebrew:

You can verify if Terraform is installed by running:

I have used Terraform v0.14.4 to create this tutorial.

The set of files used to describe infrastructure in Terraform is known as a Terraform configuration. Usually, terraform loads all files that end in .tf in the folder where you define your infrastructure; for simplicity, I will use two files in this project: main.tf and variables.tf. I will also create a shell script that will run on our EC2 instance once it boots up to set up our database server and permissions.

In the code snippet above, I’m defining several AWS resources:

If you look closely in the script, you can see that some values are set using variables (var.name); those variables can be passed from the command line when we will create the AWS resources. Those variables can also be defined in a file, variables.tf; we can also assign them default values. Below, I will show you where those are defined.

When we need resource Ids for AWS resources that haven’t been created yet, we can reference our Terraform resources, as I’m doing to reference “vpcid = awsvpc.main.id” in multiple places and those will be set at runtime.

If you want to get more detailed information about AWS VPCs, you can check the official documentation or leave a comment if that’s a topic of your interest.

You can find three more resources that I’m creating as part of main.tf in the snippet below.

If you have generated one from AWS and you have just one key.pem file, you can extract the public key using the following command:

Here is the list of variables that I have defined for our infrastructure script:

The last part that I still need to show is how to configure the database and everything in our EC2 instance. Using User Data, we can pash a shell script to run on boot; it will run as root. Below is the script:

In the above script, I have added comments to each line. As you can see in the line where there’s a variable ${pghbafile}, the Terraform script is injecting the configuration file for authentication that I’ve put below:

I’m also injecting the ${allowed_ip} variable from Terraform in the configuration file above. Depending on your needs, you can restrict that to the subnet, VPC, or here for demonstration purposes; I’m allowing all IPs. Bear in mind that as I’m only opening port 22 on the Security Group that I have attached to the EC2 instance, you’re only going to be able to connect via SSH. You’re not going to be able to connect directly to PostgreSQL on port 5432 unless you open that port on incoming connections from the Security Group.

Executing our Terraform Script to Create the AWS Infrastructure

Now that we have all our scripts created, we should try to make that in AWS. We’re going to start by initializing the project directory, run in a terminal:

Terraform downloads the AWS provider and installs it in a hidden subdirectory of the current working directory. The output shows which version of the plugin was installed.

Another useful command that we have, format and indent the Terraform configuration files properly:

To verify that our scripts are syntactically correct:

Before we create the resources in AWS, we can see what’s the Terraform plan by running:

As we can see from the output, we can create the resources in AWS by running:

I’m passing -auto-approve flag, so I don’t have to confirm that I want to create the resources. That’s useful when you manage your infrastructure using CI. Below you can see the output of the apply command: 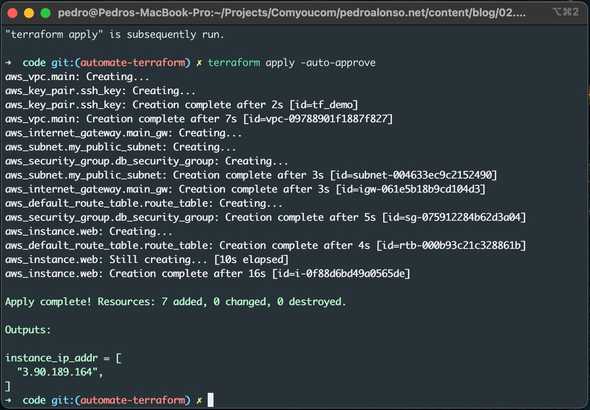 After we create the AWS resources, Terraform creates a file terraform.tfstate. This file now contains the IDs and properties of the resources Terraform created to manage or destroy those resources, as I’m going to show you. The state file must be stored securely, and it can be shared among team members, although I’d recommend keeping Terraform state remotely, in S3 is a good idea, and it’s supported easily by Terraform. To see the current state of our managed resources, you can run:

Another useful command I used during the creation of this tutorial is “taint”, to mark a resource for deletion and force it to be recreated when you run “terraform apply”. This has been useful for me when I was trying my user_data script for the EC2 instance, and I was getting errors, then I could quickly terminate the EC2 instance and create a new one.

To view a summary list of your state you can also run:

As you can see, using Terraform you can easily automate repeated environments and keep your infrastructure as code so that you can update it in a repeatable way less prone to human errors. As I mentioned in the introduction, one of Terraform’s advantages is that it’s not specific to only one cloud service. Hence, it is useful even if you use multiple cloud providers in different projects. Feel free to leave your comments or suggestions. I want to automate this same process using Pulumi in a future tutorial and compare the process.